A lot of what we share here will make more sense if you understand the history involved.  So here goes …..

As anyone who knows me can attest, I’ve been interested in genealogy for decades.  Well before computers came along, my husband and I would visit courthouses and cemeteries in search of information about our families.  After his granddaughter was born in 2001, his ex-wife gave me information about her family so I could add it in to the family tree I was putting together for the newest addition to the family.  Here’s one of her e-mails to me.  I’ve redacted the information she shared, since it gives a lot of details about living individuals.  But you get the gist…..

I joined Ancestry.com on November 25, 2000.  I guess our alienating parent thought I was having too much fun with all of my genealogy, so she decided to join herself on January 16, 2002. 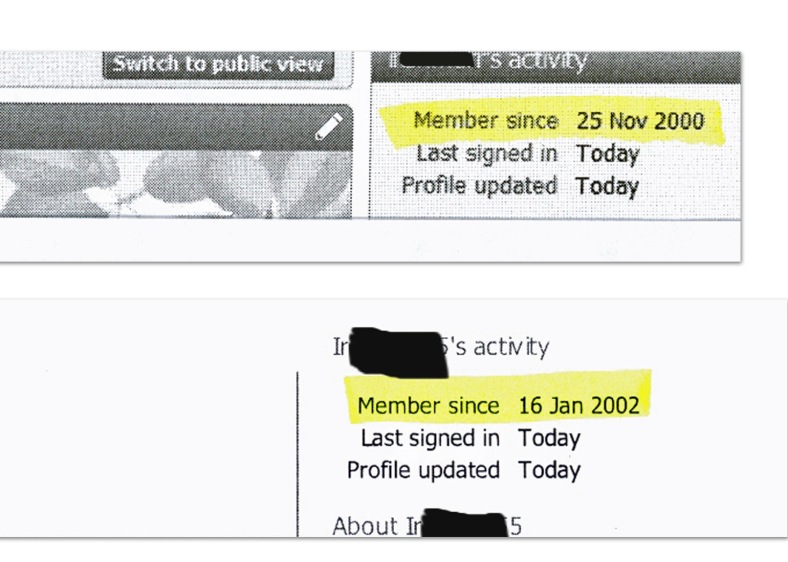 We had a tree on Rootsweb.com — and, of course, our alienating parent had to post several there as well.  (One wasn’t enough?)

We also had a tree on Genealogy.com, through our Family Tree Maker software, and our alienating parent posted one there herself.  Unfortunately, she ran into a little trouble when she decided to use that forum for her own personal observations and comments, as you can see from this e-mail we received from the Customer Service Department in 2004.

This also shows that this particular aspect of problems with our alienating parent have been going over for over ten years now, sad as that is to say.

I’ve been a member of Find a Grave for 13 years.  Our alienating parent didn’t join that group until almost two years ago.  Wonder why it took her so long?  lol! 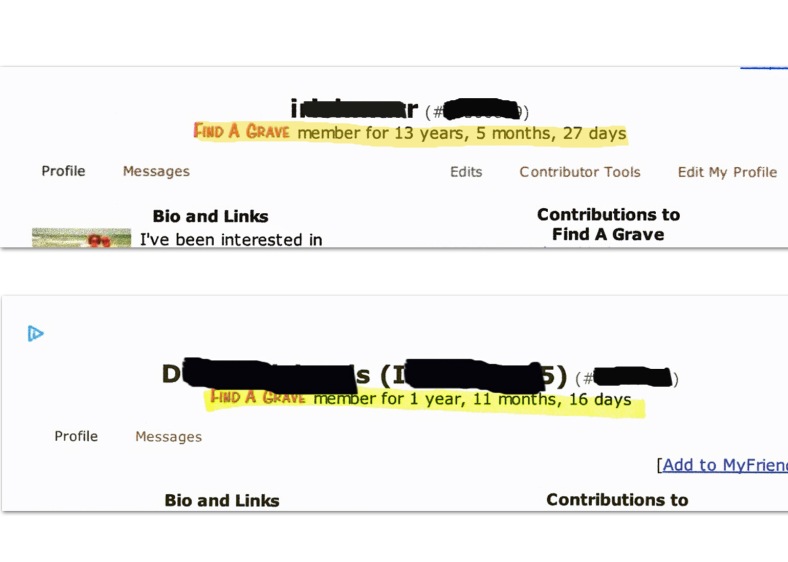 When I joined the website called Geni on December 6, 2012, we knew it wouldn’t be long until our alienating parent joined too.  And she didn’t disappoint!

She provided a link to “Geri,” which actually takes you to her page on “Geni.”  Not quite sure who Geri is …..

We’ve touched on the whole photography website situation in an earlier post.  We signed up for that website in 2001 and are still members.   Our alienating parent joined in 2007 or 2008 and didn’t last long.  We also have a photo page on Flickr, which we joined in August 2007.  When our alienating parent left the first website, she joined Flickr and once she realized we also have a page there, couldn’t resist making comments about how I was “following” her there.  Check the date our alienating parent joined and you’ll clearly see that I was on Flickr first …… just like all of the other websites.

And the latest is:  I created a family tree via The Next Generation of Genealogy Sitebuilding in September, 2012.  Guess who just created one there herself?  Have I mentioned that I’m going to take up skydiving?   And we’ve got a pool going to see how long it takes our alienating parent to start a blog here on wordpress.  Want to get in on it?  lol!

I’m trying to make light of this situation but, in actuality, it’s more than a little disconcerting.  Is someone so obsessed with what I’m doing that she’ll follow me from website to website to website?  That alone is enough to scare me.  There are hundreds of thousands of things out there that our alienating parent could take an interest in, and she chose genealogy and photography?  Like I said at the beginning of this post, I don’t believe anyone thinks that is a coincidence.  I’ll close this post with something I found about imitation, which hits very close to home:

“Having a copycat can be flattering and even somewhat amusing, at first. However, after awhile, it becomes outright annoying. I mean honestly, what normally adjusted woman imitates another woman constantly? There has to be some sort of imbalance there.”

This blog hasn’t been created to insult or put our alienating parent down.  It has been created to point out that there are some valid issues which we’re concerned about, and this is one of them.   There’s well documented evidence that links imitation with depression, anxiety and a drop in self-esteem.  Given our alienating parent’s history, it’s not surprising that she feels the need to imitate others.

But, on the other hand, I should be permitted to enjoy my hobbies without this constant inter-action with our alienating parent.   We have had no contact with her or her family for several years, but she keeps popping up on websites that I’m on.   I could be wrong, but I think that’s exactly why she keeps joining the same websites that I’m on.  I know she’ll scoff and say:  don’t flatter yourself!  But what other explanation is there for a person who has no interest in genealogy to suddenly join all of these genealogy websites?  And the same is true for the photography websites.    To make certain she continues to have this contact with me?  We have statcounters on many of our websites which show exactly how much time our alienating parent spends looking at our various postings.  But that will have to wait for another post …..

As most of you know, I have a long-standing love of photography and have been taking photographs for many, many years.  Our alienating parent once told me that I had more photographs of her children than she did.  But then, suddenly, she developed an intense love of photography herself!  She even went so far as to join the same photo website that I am on.  That website has communities, one of which is a very active Daily Photos community.  And wouldn’t you know it, our alienating parent also joined that community!

The following comment was left anonymously on a photo which was No. 2 in the most popular photos in the Daily Community.  One of my photographs was No. 1 that same day.

Luckily, the comment was left on a photo of  a friend of mine — who just happened to also have access to IP addresses of people who visited her website — and you’ll never guess who left this message!?!  Okay ….. you probably can guess.  😉

Yes, it was our alienating parent!.  It was at this point that a lot of my friends and acquaintances on this particular website realized precisely how disturbing she really is.  I had to explain why someone would go in and leave this long, rambling message about “others” who “manipulate” their images.  What does “And now, she is copying my guest messages and putting them on their own site as if it were me” have to do with the photo posted by my friend?  I have had to explain this so many times over the years, maybe I should just make up a template for my standard response?

The above comment really wasn’t about the photo she was commenting on, was it?  Unfortunately that was obvious to everyone except our alienating parent, who went on to make comments like this for quite some time — until she finally left the website.

I have to share one example of the many comments left on my photo website.  By this point, I was able to capture the IP address of anyone leaving comments and yes, you guessed it, they were all left by my husband’s ex-wife!

Love how she went from someone who didn’t even own a camera to an expert — capable of critiquing my photography!  Exposure, focus, lacking in follow through — all as an anonymous “guest,” of course.  You’d think an expert photographer would be happy to have their name associated with their comments, right?  But, of course, as usual it wasn’t about the photography.

In closing, I can’t help but point out:  why would someone who claims to have such disdain for me purposely join a photography website that I am active on and which I have been a member of for many years?  There are hundreds of photo websites online, so why did she pick the one I was associated with?  And then, to not only buy a membership to the website, but then join the community I am a part of?  A community which results in daily communication between members?  Was she purposely looking for continued interaction with me?   It’s difficult to come up with any other explanation, isn’t it?

After talking with family, friends and even a professional who is used to dealing with family issues, we have been encouraged to share our story.

We have lived with a particular situation for over thirty years and have just gotten used to what we have been dealing with.  It’s something we’ve learned to live with, and really don’t give it much thought.  It’s just a fact of life.

When we began putting together a book about my husband’s family and sharing stories with many of his family members, those conversations shed a new light on our dilemma.  They made us realize how incredibly bizarre much of the behavior we have had to deal with over the past thirty years really is.

So this blog has been created to express our feelings about everything we’ve gone through, as well as share our story with all of you.  We’ll touch on the terrible trauma resulting from child abuse and how it can affect a person for many, many years to come.  We’ll share how that trauma often manifests itself, since we have firsthand knowledge of many of the classic symptoms of child abuse.

We’ll share what my in-laws had to go through, which is a situation identical to the one my husband has also gone through.  On a lighter note, we’ll share memories and stories from my in-laws’ families, which is in direct contradiction to what is being published on genealogy websites about our family.

Genealogy will also be a subject here.  Specifically how one individual is trying to re-write history through genealogy.  “On a personal note …..” is a completely inappropriate way to start a genealogical post, especially when the posted “stories” have no basis in truth.  Making up something about someone who is gone, simply to make herself feel better, is the lowest of the low.  While many people have urged us to do the same and post details about her father’s behavior before his death — all of which is actually documented by public record — we prefer not to stoop to her level and have refrained from doing so.  Although it can be very tempting …..    🙂

Stay tuned, and thank you for taking the time to read this blog.  There will be much more to follow.